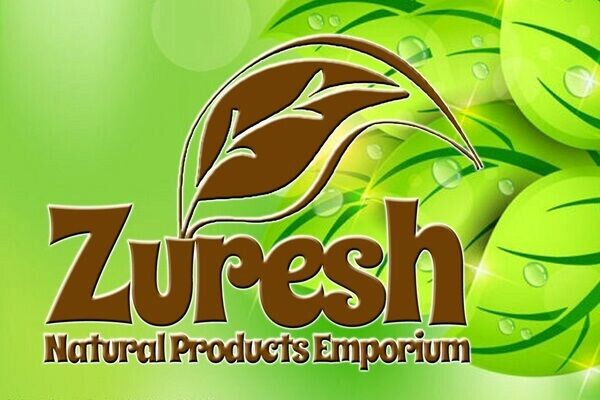 ATTENTION!!!!!!!!!!  SHIPPING timeframes ARE 10-14 BUSINESS DAYS, NOT TO INCLUDE weekends or holidays. Please allow full timeframe before contacting customer service.

A Night Out With Zuresh 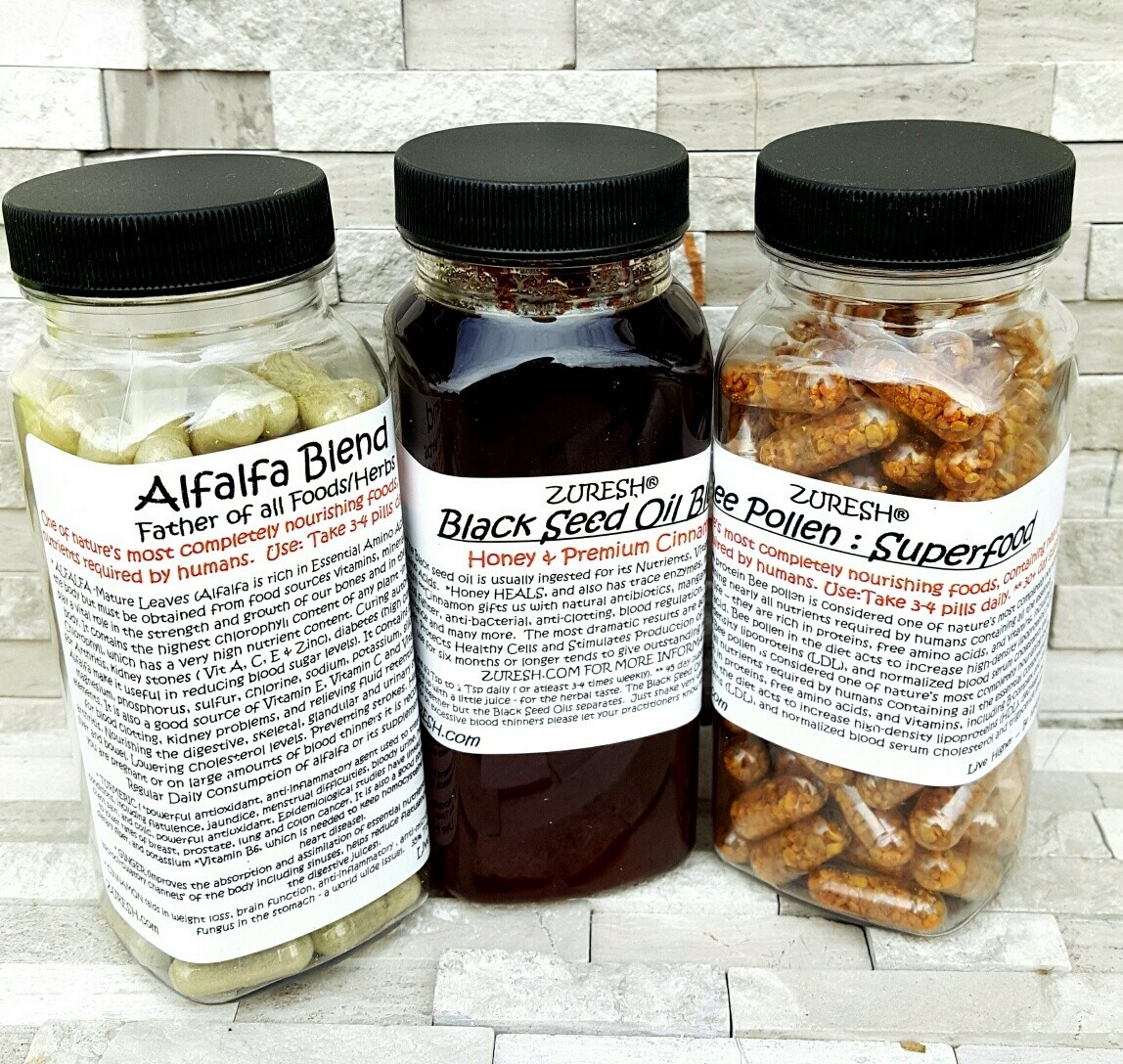 ***One of our remedies for diseases/all that ails.......Black Cumin Seed Oil - Habbatul Baraka (the Blessed Seed), and by its botanical name "Nigella Sativa"....Looking for that daily rejuvenation among the things that will help keep you health at its optimum?...RAW Unrefined Black Seed oil mixed with Organic Honey (add whole crushed garlic when you get it) are excellent tonics for people with asthma or coughs as well as those who want to enhance their immunity during cold and flu season or when an infection is setting in. Mohammed said that "...black cumin cures every disease but death itself...". I praise the capacity of the seeds to restore normalcy. For centuries, the Black Seed herb and oil has been used by millions of people in Asia, Middle East, Egypt and Africa to support their health. The nutrients dramatically aid me to correct my deficiency conditions. Great with rheumatism and other inflammatory diseases, Protects Healthy Cells and Stimulates Production of Natural Interferon (family of mammalian cytokines with the ability to inhibit viral infection). Nigella sativa seeds have very little aroma but are carminative, meaning they tend to aid digestion and relieve gases in the stomach and intestines. Black Cumin seed oil aid peristalsis and elimination. The essential oil of black cumin is antimicrobial and helps to rid the intestines of worms. Also at the International Cancer Congress in New Delhi the anti-tumour effect of black cumin oil has been introduced to many scientists and doctors.(info from Manataka® American Indian Council). We loved it sooooooooo much we use it in our Rebirth Hair Tonic.

Directions: Take 1/2 Tsp to 1 Tsp daily. May need to shake before each use. Follow up with a little juice - for the herbal taste. The Black Seed Oil and Honey are blended and marinated together but sometimes some of the Black Seed Oil/Sediment, cinnamon & honey separates from each other. Just place the entire jar in a cup of warm water for a minute to soften the blend and shake very well.

The owner deals with an Autoimmune Disease (Lupus). She takes the Black Seed Oil Blend on a regular basis. There are so many reasons we could list... but we tried to keep this short! Black Cumin Seeds have been found superior to almost every other natural remedy when used for autoimmune disorders, conditions in which patients suffer greatly because their own systems attack their bodies. Black cumin, especially when combined with garlic, is regarded as a harmonizer of the imbalance which allows immune cells to destroy healthy cells.

Nigella sativa is one the most revered medicinal seeds in history. The best seeds come from Egypt where they grow under almost perfect conditions in oases where they are watered until the seed pods form. Black cumin seeds were found in the tomb of Tutankhamun. Though black cumin seeds are mentioned in the Bible as well as in the words of the Prophet Mohammed, they were not carefully researched until over forty years ago. Since this time, more than 200 studies have been conducted in universities. The most dramatic results are achieved also with asthma and allergies. These respond relatively quickly unless there is infection, in which case, the infection needs to be eliminated before the symptoms of immune weakness subside. Continued use for six months or longer tends to give outstanding results.
***
Alfalfa Blend: One of Nature’s most completely Nourishing Foods, containing nearly all Nutrients required by Humans.

Ingredients: ALFALFA -Mature Leaves (Alfalfa is rich in Essential Amino Acids, which are not made by the body but must be obtained from food sources vitamins, minerals and other nutrients that play a vital role in the strength and growth of our bones and in the maintenance of a healthy body. It contains the highest chlorophyll content of any plant -in fact, it is used in Liquid Chlorophyll, which has a very high nutrient content. Curing auto-immune disorder. Remedy for Arthritis, kidney stones (Vit A, C, E & Zinc), diabetes (high concentration of alkaloids in Alfalfa make it useful in reducing blood sugar levels). Healing arthritis. Nourishing the digestive, skeletal, glandular and urinary system .Cleansing the blood, liver and bowel. Lowering cholesterol levels. Preventing strokes. Healing whooping cough. Contains: Plant Protein, Iron, calcium, magnesium, phosphorus, sulfur, chlorine, sodium, potassium, silicon, carotene and trace elements. Vitamin E, C, K (necessary for blood clotting, kidney problems, and relieving fluid retention and swelling). 65% Total. *TURMERIC: Powerful Antioxidants, Anti-inflammatory agents used to treat a wide variety of conditions including but not limited to flatulence, jaundice, menstrual difficulties, bloody urine, hemorrhage, toothache, bruises, chest pain (heartburn/circulation) & colic etc. Epidemiological studies (Disease) have linked its frequent use to lower rates of breast, prostate, lung and colon cancer. loaded with iron, manganese, dietary fiber, potassium & *Vitamin B6 (keeps homocysteine levels from getting too high (Amino from Meat - heart disease). 25% of Total.
Ginger and Cinnamon.

**If you are pregnant (first trimester) or on large amounts of blood thinners it is recommended that you avoid Regular Daily consumption of Alfalfa or its supplements. Use 3 times a week.
***
Bee Pollen: SUPERFOOD
One of nature’s most completely nourishing foods, containing nearly all nutrients required by humans.

Save this product for later
Display prices in: USD 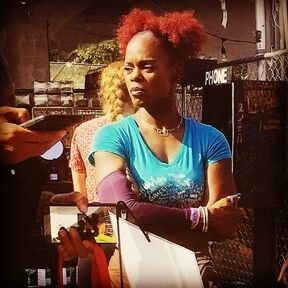 Welcome to Zuresh! Our natural solution to all of your hair, skin, beauty, and health needs.  I am Mia, creator of Zuresh.  I will be your guide through the Zuresh experience!  Zuresh was created in 2001 from a personal need.  Lupus (a blood disorder) reared its UGLY head after being dormant for a while and like many people witha skin disorder, Lupus....Eczema...Psoriasis...Dermatitis, your skin can get out of control.  It ranges from extreme sensitivity and irritations to like mine pimple-like legions and sores (like mine) ranging from the size of dimes or quarters.  Conventional soaps or lotions were out of the question, because they severely irritated my skin.  Prescriptions worked only temporarily and also inhibited the pigment in my skin from coming back.  After much investigation I gound that my special SHEA BODY BLEND (also known as Karite) not only calmed my irritated skin but also diminished me legions while fading them as well.

This still left me without a safe cleanser I could use everywhere.  With little help I was able to develop my own kind of awesome FULL BODY CLEANSER.  This cleanser can be used all over the body, and is great for the entire family even infants.  It is even a great shampoo and shaving cream.  Enjoy Sulphate, Paraben, & Alcohol Free products!

I purchased your products for the first time at the 2010 African Festival, in Chicago, I purchased for myself, sister,( who is being treated for cancer), and nephew. After my other family members learned this they were upset with me because I did not purchase products for them as well. Needless to say I had to use purchase small containers and share with them. We all love your product. I am interested in becoming a rep for this product. I have been telling all of my friends and coworkers and letting them feel my skin,(it is so soft). I am so happy that my nephew and I stopped by your booth. You have a great product

Ok, I was at the African Festival of Arts in Chicago yesterday, September 4th and my girlfriend wanted me to see "her" bag at your booth (beautiful Soul bag by the way - ICONICLEE.COM). Well anyway we started talking about the Zuresh products because I said that I use cheap conditioner and apple cider vinegar in my hair currently. So the gentleman gave me a sample of a product he told me to use to wash my hair and body. I left but returned immediately because I loved how the sample felt on my skin and ended up purchasing the tropical spa shea body blend but regret that I did not purchase the wash because I ABSOLUTELY LOVED THE RESULTS FROM THE SAMPLE I WAS GIVEN AND THE TROPICAL SPA SHEA BODY BLEND!!!!! My hair is so super soft and I also used it in my youngest son's hair. I can't wait for my oldest son to come home from grandma's house and try it in his hair which his and the youngest both have curly hair like mine. I will be ordering online but I hope you all make it back to Chicago for the event at Malcolm X College in December, I really want you to see the difference in my hair. Thank you so much for introducing me to your products. Many blessings to you all.

OMG I am so glad you have the pet stuff online. I bought my friend some stuff for her cat from you. I could not believe the "cat" had allergies. When you said that you would mix something up for us - scent free - I was thinking ok. And the next week you had it and she loved it. Her cat is her best friend and only likes her. She takes allergy pills just to keep the cat. We thought it was funny that the cat was allergic to her and even after the vet gave her medications that barely worked you made a product that conditioned the cat and had not all the scent she can't take. Awesome Mia.

I love the COLLAGEN REPLACEMENT and have been using it for the entire summer. My face looks and feels great and I am very pleased with the results. I remember telling you I had sun bathed when I lived on the West coast when I was younger and it did damage to my skin and the Collagen Replacement has really changed the look and feel of my facial skin. It is what I use to save my facial skin. I love the fact that I get waymore than the power of Vitamin C in your botanicals.